In the words of the Arkells, “I never thought that this would happen…” that’s how I was feeling on Friday evening when the folks at Budweiser Gardens tweeted me with the news that I would be the #BGReviewer for the last Canadian stop on the Knocking at the Door Tour. Originally from Hamilton, Ontario myself, I have been a fan of the Arkells since their early days playing shows on campus at McMaster University and I’ve had the privilege of being at the show this February when they made their triumphant return back to the hammer for their 10th anniversary show and the largest crowd that they had play for to date in their long and winding journey. Some may call me crazy, making the drive to London last minute to catch the guys was no stretch for me as I had travelled with a few McMaster alumni friends to Chicago a few weeks ago to see the band in a more intimate setting at Lincoln Hall in Chicago. My friend Juleigh and I jumped into the car, queued up the Arkells playlist and made our way west to London.

There is always an energy when you enter a venue for an Arkells show – people are genuinely excited, they know that the band is going to put on a show that they won’t forget and the feeling is contagious. Walking into Budweiser Gardens I was impressed to see the show was near sold out and the anticipation for the adventure of the evening kicked-in.

Juno award winner and fellow Canadian Matt Mays set the tone for the night with an opening set that rocked the audience in a way that only Matt knows how. His support for the three Canadian dates of the tour saw Mays’ return to music after a five-year hiatus. 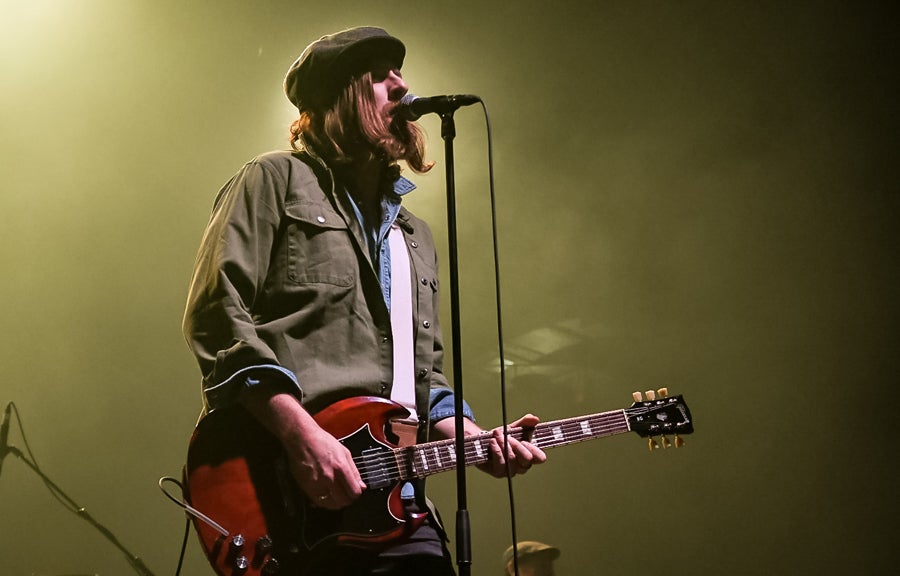 After a quick gear swap for the bands and a beverage run for the everyone waiting for the show to begin, the lights in the arena were dimmed to darkness, a banner with the Arkells name on it rose up along the back of the stage to a single spotlight and the chords of ‘Amazing Grace’ began to echo throughout the venue. Before we knew it, the lights were up, the strobes were blazing, the band was rocking and ‘Making Due’ was pounding throughout the speakers as the audience began to dance.

Shortly after the opening number, the Nondenominational London Choir was being called upon for our first song of the night – the Nondenominational choir is a fixture at EVERY Arkells show, it’s a coming together of every voice attending, led by Max to help back up the band for certain key parts of various songs throughout the show. Our first duty was Max asking the audience to join together for unified warm-up to the chorus of ‘Michigan Left’. A proper warm-up for all our voices was necessary as we geared up for the Saturday night and what was ahead for all of us. Instantly the arena of some 5000 voices joined together to belt out the back-up vocals for the remainder of the song. There is an assumed responsibility attending an Arkells show on a Saturday night, since most of those in attendance are not at work the next day there is no excuse to not have fun! 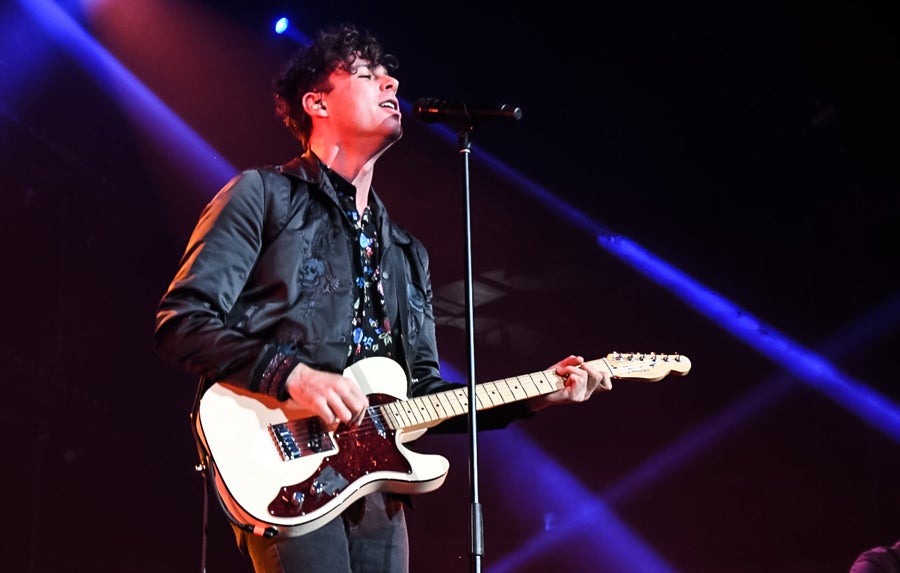 Next there was ‘NTTTWH’, ‘11:11’, ‘Come Back Home’ and ‘Private School’, then keeping to tradition, Max looked out into the audience for someone to join them on stage. If you’re familiar with this common fixture at Arkells shows you know it could be anyone from a guitar player, to someone who can tear up a harmonic solo or even a kid. Tonight, one lucky fan had come prepared, with a sign that asked the band to “give him a chance” he was quickly ushered up on to stage where Rowan not only played a killer guitar solo, but also took to the mic to sing the final chorus with the band. 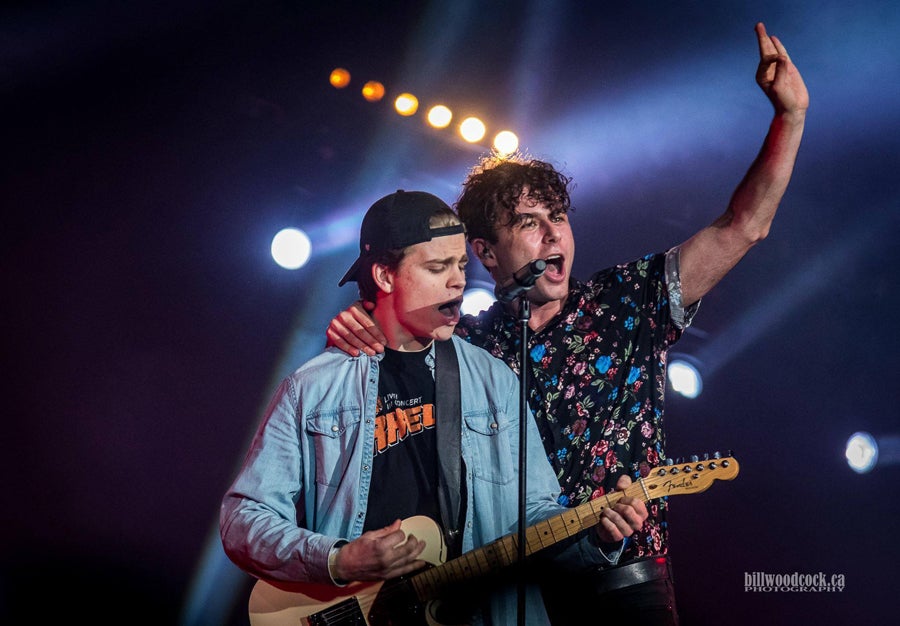 After ‘Pullin’ Punches’ and ‘Great Balls of Fire’ – with a keyboard solo by the fantastic Anthony who always knows how to tickle the ivories just right – someone killed the lights and it was time for Max to go on a little tour…of the arena. Spotlight on a random section in the lower bowl and as the first notes of ‘Drake’s Dad’ started, road trip! Making his way from one section to the next, from the hundred level to the mix board in the middle of the floor, Max covered a lot of ground as he belted out the lyrics to one of my favourite tracks from Morning Report! Returning to the stage it was time for the choir to prepare themselves again, this time for an incredible rendition of ‘Leather Jacket!’

Following up with ‘Book Club’ and ‘Oh, the Boss Is Coming!’, the audience continued to ride the wave of energy as they geared up for the final songs of the night. Then the lights were dimmed again and there was a shuffle of equipment on stage, the band arranged themselves around two mics, acoustic instruments in hand, as the lights singled in on the group congregated in the middle of the stage. The chords of ‘And Then Some’ filled the quiet space, cellphone lights began to illuminate the floor and seating, along with a few lighters. Max didn’t even need to ask for this song, the Nondenominational Choir was singing along well before the first verse was complete. This is one of my favourite moments of ANY Arkells show, the audience collectively lit up the room and a choir of voices belted out every last word of the song together. If you’re going to get goosebumps at a concert, it is moments like this that give you the feels. 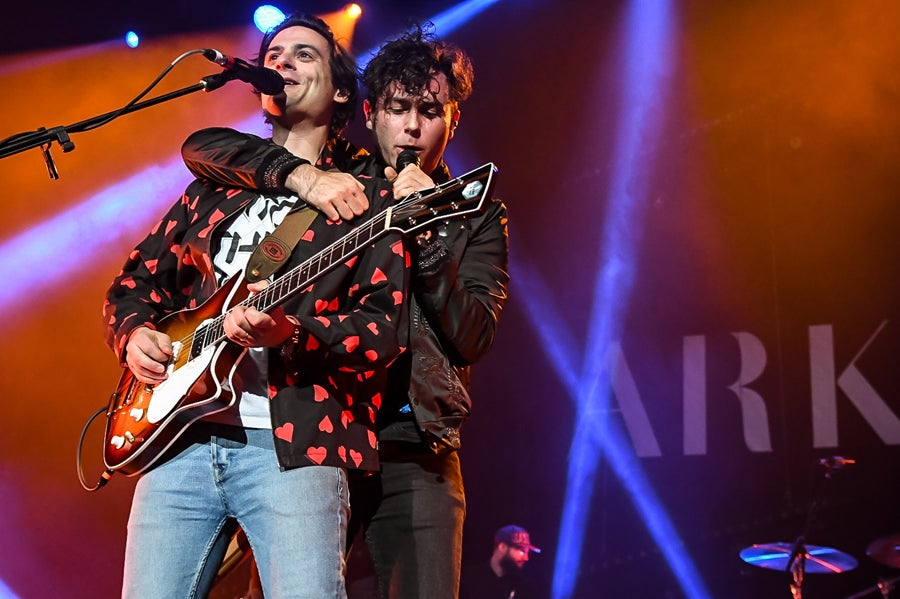 We made our way down to the floor – thanks to a good friend we were going to be able to be in the middle of the actions for the remainder of the show. Prior to the band beginning ‘Whistleblower’, Max took a moment to address the audience on the importance that this song holds in relation to the current events in the world. The song was originally written in 2011 for the Michigan Left album, but in the past year the track has taken on a meaning of its own during current global events. In February, they played this song to reflect upon the recent election, in Chicago a few weeks ago it was quite an experience to be in the states to hear the words of the song and the new second verse ring through a hall or cheers/applause in support of the message it states. Tonight, again folks rose to their feet, fits in the air and echoing the words that express the feelings that so many currently share.

Before we knew it ‘A Little Rain’ (A Song for Pete) began, Max asked everyone to get their dancing shoes ready and the crowd pressed closer together as we all knew that if Max was going to go for a crowd surf, this would be the song. Dancing among sweaty bodies of strangers, the infectious energy in the arena continued to pulse throughout everyone present. Closing in on the last song of the “official” set, Max asked everyone to turn to their neighbor and put their arm around each other. This is another staple moment of every Arkells show and it never ceases to amaze me how without hesitation a majority of the crowd looks to the person next to them friend or stranger and puts their arm around them to sway effortlessly to ‘My Heart’s Always Yours’. The Nondenominational Choir sang in unison, everybody swaying side-to-side, it’s moments like this I won’t forget. 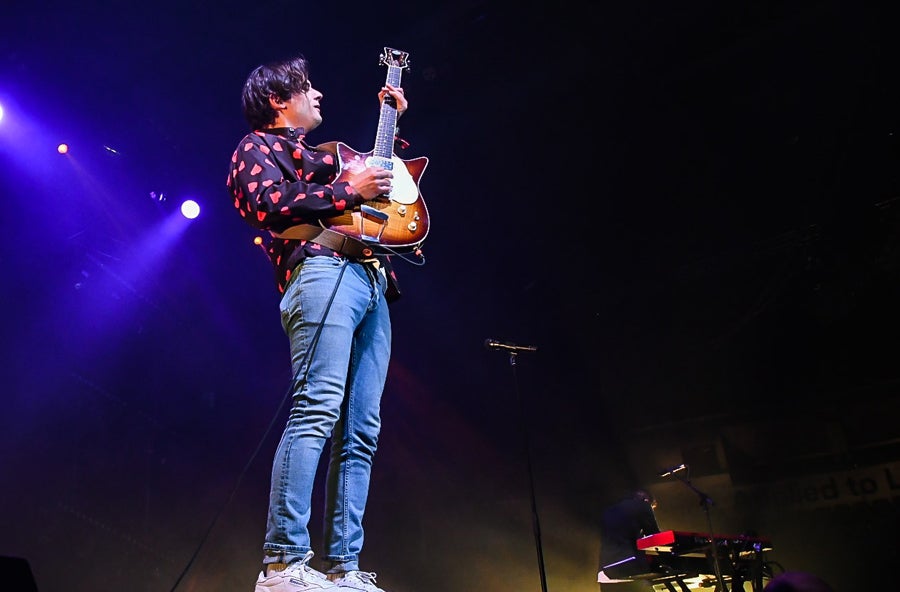 After exciting the stage to cheers already chanting for an encore, Arkells quickly returned and kick-off the encore by performing a tribute to The Tragically Hip and the late Gord Downie with the song ‘My Music at Work’. It was a fitting moment, Max has spoken in recent months about his experience touring with The Hip in 2013 and how it was Gord who showed him it was okay to be eccentric and dance on stage, something that he is known for doing at every Arkells show. Then came the final song, the floor pounding, soul shaking track that has cemented Arkells success in recent months – ‘Knocking at the Door’. While I always wish that this song would come earlier in the set list, I understand why they leave the best for last, it leaves you with a feeling unlike any other. 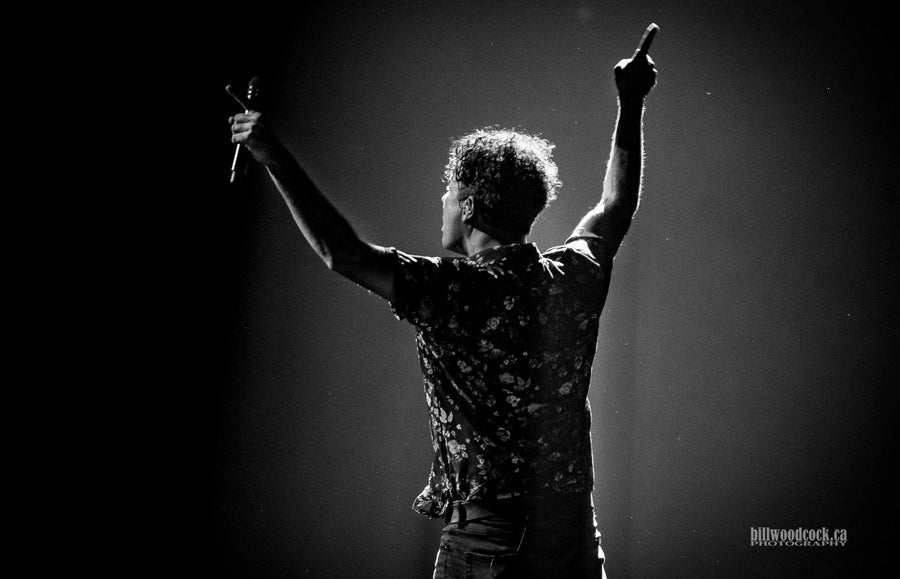 Arkells are the kind of musicians who have never lost sight of where they come from, they spend time at each show reminiscing about the first time they played in the local area, almost in awe of where they are today. Tonight, they spoke about how the first time they played in London, likely in 2006/2007, the band took the Greyhound to London and stored their equipment under the bus. The bar that they played in that night is no longer surviving, but the friends from Hamilton who have poured every ounce of passion, blood, sweat and tears into this band over the last 10 + years are still alive and thriving, now more than ever.

EVERY single time Arkells play live they give the audience every ounce of energy, there is no shortage of commitment to every song and Max never ceases to communicate how grateful he is to be able to visit each city and share the band’s music. There are very few artists out there like the Arkells, maybe it’s because they have worked for over 10 years to get to where they are or maybe it’s just the passion that they have which is able to unite us all together, even just for one night. If you haven’t seen them live yet I encourage you to treat yourself to an evening of pure heart pumping magic the next time they are in your city. And if you’ve already seen them live, well then you know what I’m talking about. Thanks again to the Budweiser Gardens Team for the opportunity to see Arkells in London and to share my concert experience with everyone!