Tessa Virtue and Scott Moir skated into London for a mid-week stop on their Rock the Rink Tour. A cross-Canada tour, Rock the Rink brings together World and Olympic champions from around the world in a spectacular demonstration of skating skill and pure entertainment. Accompanied by Canadian band, Birds of Bellwoods, Tessa and Scott lead their cast of skaters through nearly three-hours of brilliant skating, delighting the audience from start to finish.

While any time Tessa and Scott are able to skate at home in London is special, this tour is different. Before heading out on the road, Tessa and Scott announced they would be retiring from skating together following the end of Rock the Rink. After 22 years together, Canada’s Skating Sweethearts will finally hang up their skates and start the next chapters in their lives. Naturally, emotions were high from the moment Tessa and Scott appeared on the ice, but the upbeat and energetic performances couldn’t help but make you happy to be celebrating their many achievements as a pair. 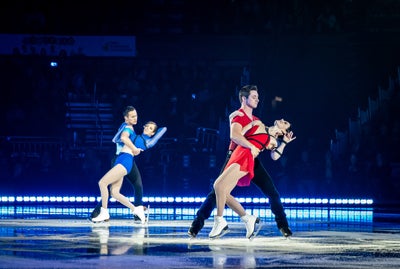 Bringing the “rock” to the “rink”, Birds of Bellwoods opened the show with a 30-minute set at center ice. A Toronto-based band, the group played through some songs of their e.p. Victoria including “Hey Hey” and “My Heart is Yours.” Embracing a different sound with the use of instruments like a mandolin and an upright double bass, Birds of Bellwoods are sure to be active in Canadian alt-rock music scene for years to come. 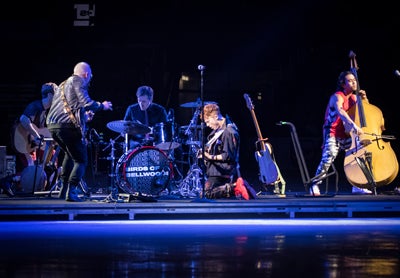 Following a cleaning of the ice, the Rock the Rink cast made their debut to a medley of classic rock hits including “Sympathy for the Devil” by the Rolling Stones. Joining Tessa and Scott on this tour is Kaetlyn Osmond, Patrick Chan, Carolina Kostner, Elvis Stojko, Jeremy Abbott, and pairs team Tatiana Volosozhar and Maxim Trankov. Many have special ties to London itself, as the tour featured almost every World Champion from the 2013 competition, of which London was the host city.

After thunderous applause welcoming Tessa and Scott, the pair briefly spoke to the audience, expressing their appreciation of being home and welcoming everyone to the show. They then introduced Jeremy Abbott, an American skater, for a solo. Abbott was followed by Kaetlyn Osmond skating to “Thursday” by Jess Glynn, showing off not only her skating skill but sharing the very important message that who you are is enough. 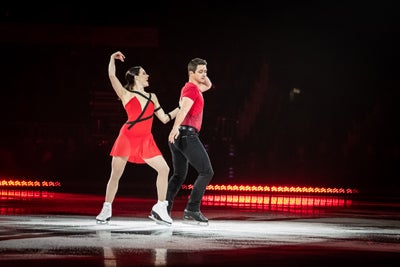 Returning to classic hits, Volosozhar and Trankov skated to the Whitney Houston power ballad “I Will Always Love You,” demonstrating with ease the many lifts and throws that thrill an audience watching pairs skating. But it was Canadian great Elvis Stojko who left the audience Thunder Struck with his performance to an AC/DC medley. As a lifelong figure skating fan, it was a thrill to see Stojko again. Patrick Chan kept the enthusiasm high with an energetic performance to everyone’s favourite wedding song, “Shout.”

Italian skater Carolina Kostner led the transition to slower programs with her skate to Celine Dion’s “Ne me quitte pas,” which was followed by the first Tessa and Scott solo to “Wish You Were Here” by Pink Floyd, reminding us of the emotion they can create for an audience by simply skating together.

Following Tessa and Scott’s skate, they drew attention to one of their passions, supporting the Special Olympics. After sharing a video of some of their work, Scott introduced local Special Olympics skater Hailey who wowed the audience with a fantastic skate to “Don’t Stop Me Now” by Queen. The cast then joined together in a restaurant scene to various songs including “Sway” by Dean Martin.

Accompanied by various solos, Birds of Bellwoods returned to perform “Let You Go,” the acoustic version of which was recorded just for Rock the Rink.

Returning the energy, the cast re-emerged in brightly coloured costumes and a jukebox to skate to a medley of Motown hits by the likes of Marvin Gaye and Stevie Wonder, showing off just how much fun they can have on the ice together. Stojko especially thrilled skating to “Superstitious” showing that he can definitely still jump!

Finally, it was time for Tessa and Scott to make everyone cry. The screens played a video of the two, thanking the audience, Canada, and each other for the wonderful journey they have had together over the last few decades. It was heartfelt and beautiful and truly showed the appreciation Tessa and Scott have for their journey they have had as skaters together. The video was followed by a program to “Fix You” by Coldplay in which the other cast members tried to keep Tessa and Scott apart, but in the end, the pair found themselves together on the ice with all others gone. It was a beautiful metaphor for their time together and they were celebrated at the end with a long-standing ovation from the hometown crowd.

Ending on a happier note, the cast rejoined Tessa and Scott, skating to “Viva La Vida” also by Coldplay. This skate was also followed by a standing ovation, which was well-earned by all on the ice.