The first time I ever darkened the doorway of Budweiser Gardens, I was a visitor to the city, taking in a London Knights game. At this point, over 10 years later, I’ve found myself thinking of the venue’s hallowed halls as more of a home away from home.

Speaking as a reporter/photographer for Our London, 2017 has been one of the best years in recent memory for live music and entertainment here at home, owed in no small part to the big names brought in by the folks at the Bud. From the Dixie Chicks to Jeff Foxworthy to Cirque du Soleil, getting the chance to take in so many incredible performances has been a highlight of this journalist’s career. Whether it was time spent over a pair of sold-out nights with Chris Stapleton and Green Day, or a weekend tromping around the grounds at Trackside Music Festival, it’s been nothing but a labour of love and I just couldn’t pass up a minute of it. After all, who wouldn’t want to spend their evenings in a photo pit, surrounded by excited fans, taking in an amazing show? Would I call it work? Hardly.

When the staff at Budweiser Gardens asked me to write their year-end blog, I was nothing less than flattered. Looking back at all the amazing shows has been a real treat, and with Our London closing its doors Tuesday, Jan. 9, taking the time to reminisce about everything we’ve seen and been a part of has been good for the soul.

Narrowing the list down to my favourite experiences has been a challenge — there’s just so many! And while the struggle is certainly real, I’m going to do what I can.

Begrudgingly, here’s (only) my Top 5 of the very best moments of 2017 at Budweiser Gardens, including excerpts from coverage by Our London.

1. Living the dream with the Dixie Chicks — April 18 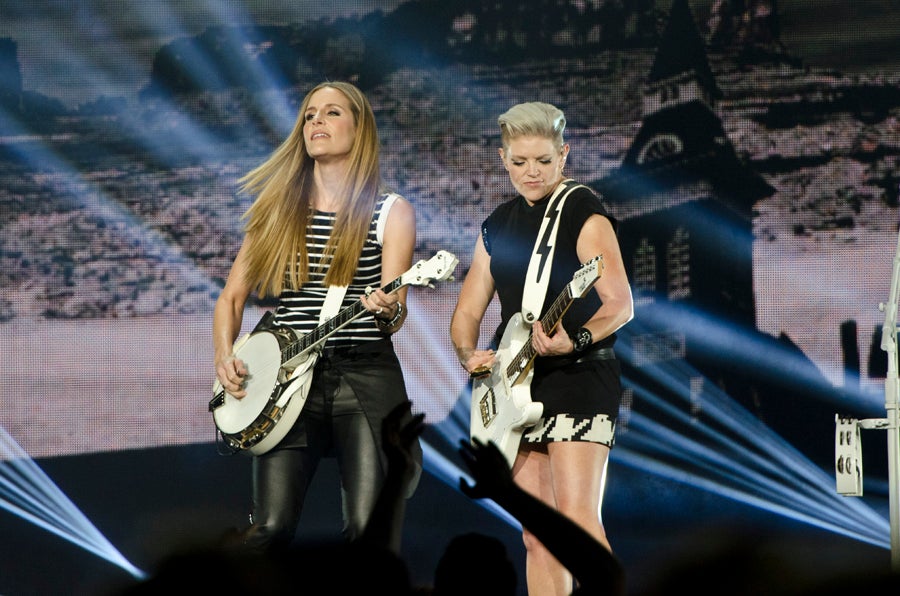 Ever since my best friend and I sat by a bonfire in our early 20s, discussing the importance of having devoted friends like Goodbye Earl’s Mary Anne and Wanda (yes, there may have been a few fruity coolers involved) — it’s been a dream of mine to see the Dixie Chicks live and in-person. So, you could imagine my excitement (yes, there may have been some jumping and yelling involved) when Budweiser Gardens announced the trio would be wrapping up their DCX MMXVII World Tour in London.

The sheer power and energy of the group is something to behold — and those banking on frontwoman Natalie Maines speaking her mind were not disappointed.

After kicking off the set with The Long Way Around and Lubbock or Leave It, Maines asked the sea of 9,000 people what they thought of U.S. President Donald Trump, drawing a chorus of boos.

“Well, how do you think we feel?” she lamented before breaking into Thunderclap Newman’s Something in the Air. “It’s a song from 1969, and now we sing it in protest.”

The hits just kept on coming, included the Fleetwood Mac classic Landslide, along with Cowboy Take Me Away, Wide Open Spaces and Sin Wagon. As the night came to an end, joined by the crew and openers Smooth Hound Smith, the Chicks brought the house down with encores Not Ready to Make Nice, and Ben Harper’s Better Way, ending the tour one year and two days after it began. 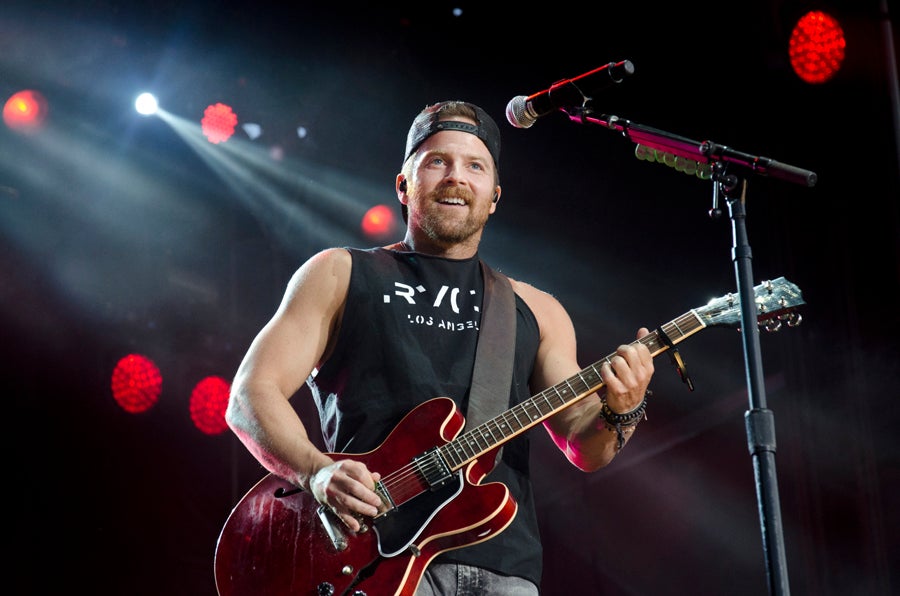 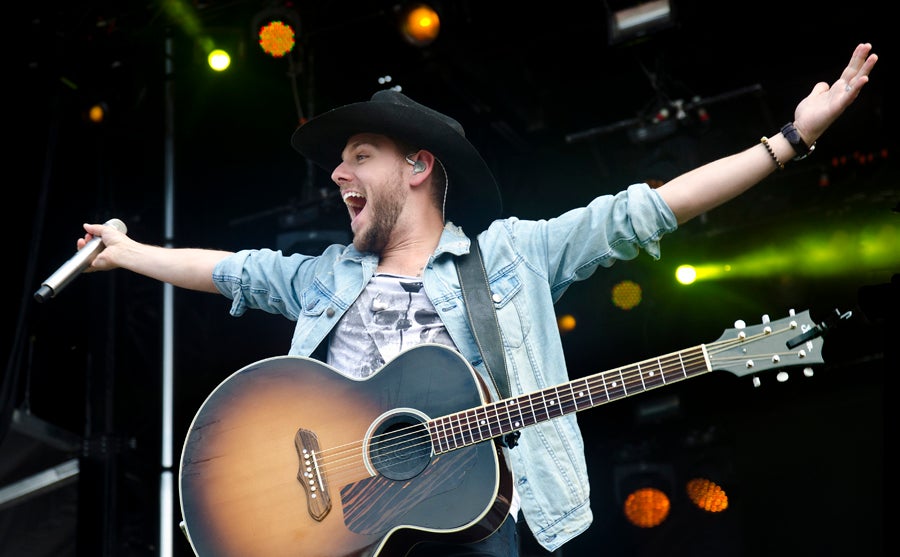 Anyone who knows me knows I’ve become a huge country fan (hints above). And while some may have a hard time understanding, it was clear London had embraced the genre like never before as the crowds at Western Fair District rang in Canada’s 150th birthday in a big way, rocking out to some of the biggest names in country music. While the weekend saw a sea of red and white welcoming performers from London’s own Genevieve Fisher to American superstars Thomas Rhett and Kip Moore, grassroots talent kept the party going on the sidetrack during the Homegrown Spotlight including Karen Emeny, Justine Chantale, and Melissa Megan. 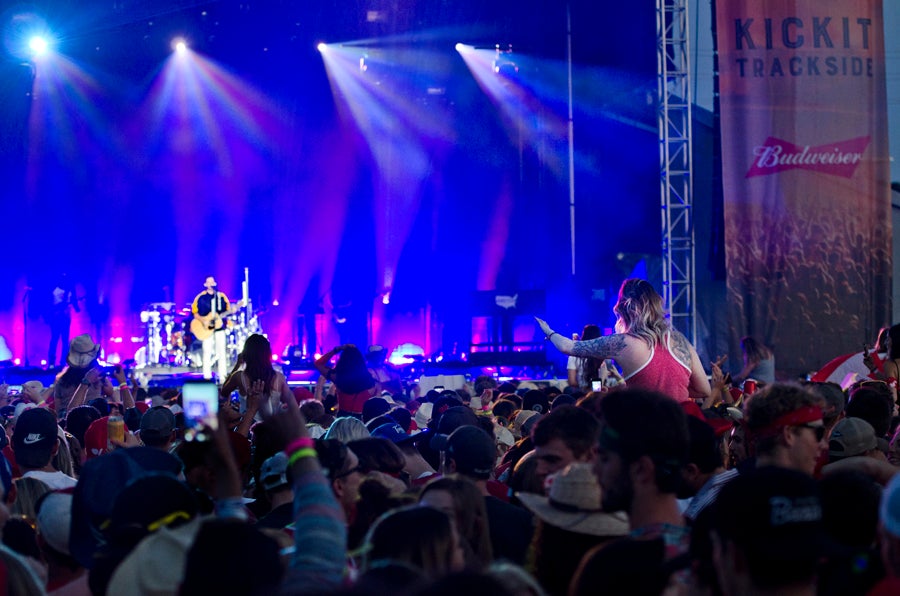 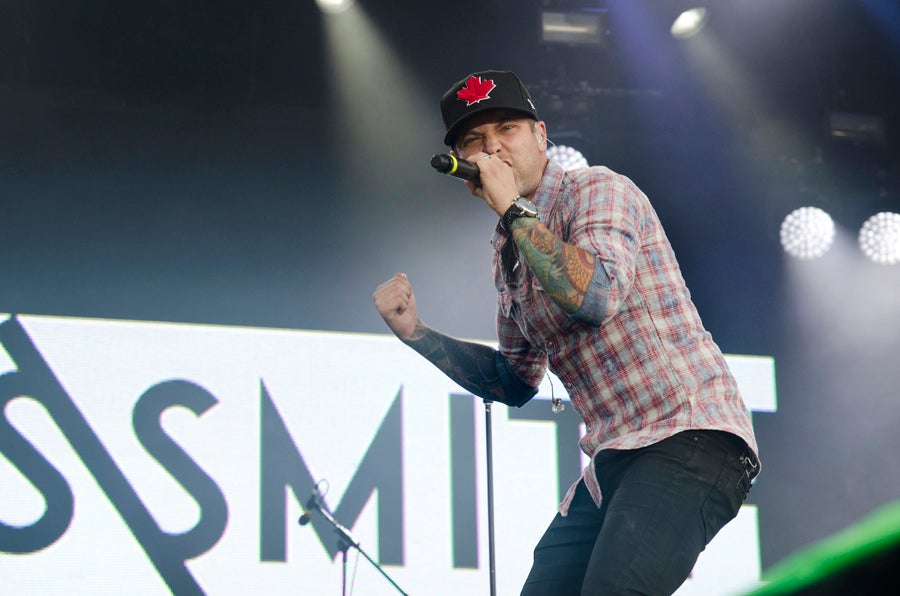 To know the Canadian country community is to love it, and the theme throughout the weekend was one of friends, fun, and overall, having a great time. On the Sunday, I was lucky enough to sit down and chat with a number of performers, including River Town Saints, Buck Twenty and Brett Kissel, about what they thought of London, and why an event like Trackside continues to be so successful. Hitting the stage for the second year in a row, it was Kissel who probably said it best.

“For me as an artist to get to play a festival both (local country radio) stations are supporting, it just goes to show this is the kind of market every artist wants to come to,” he said. “As a guy who’s been here many times, one of my first encounters was playing Western Fair and then coming for the Canadian Country Music Association Awards, Trackside and the London Music Hall — this is a community I’ll never get tired of playing in.”

With Dierks Bentley, Dustin Lynch, Tim Hicks, Dean Brody and LANCO already on the docket for 2018, I’m sure it’s going to be another amazing ride.

3. A sold-out weekend of awesome insanity – Chris Stapleton and Green Day, March 18 and 19

You’d be hard-pressed to find a larger separation in the music world than country crooner Chris Stapleton and the rockers of Green Day, but for two days in March they each had a few things in common — packing Budweiser Gardens to the rafters, and rocking the house with two of the best shows I’ve ever seen. 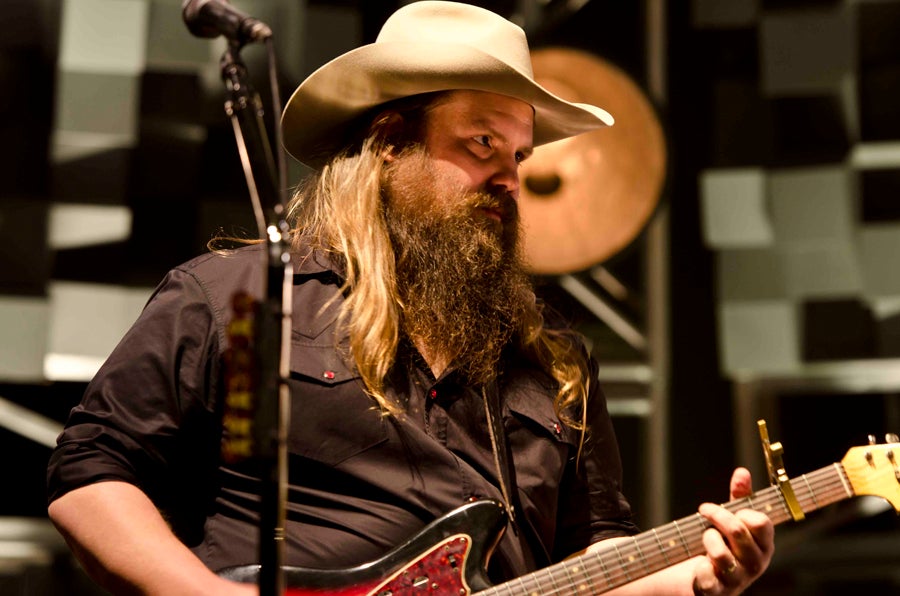 For a man who started out penning hits for some of music's biggest stars, including George Strait, Kenny Chesney, and Darius Rucker, Stapleton joined the ranks of the country elite just over two years ago with his debut studio album, Traveller. Since then critics and fans alike have flocked to see the Grammy Award-winner, whose passion and heart are enough to fill even the largest venue.

Serenading the capacity crowd with ballads Tennessee Whiskey and More of You, before bringing down the house with Parachute, Stapleton continued to set the arena on fire, capping off the night with no less than four encores, leaving the crowd still screaming for more.

The very next night, Green Day pulled out all the stops, dropping three decades of hits on to their own sold-out crowd — the same crowd who couldn’t help but sing at the top of their lungs to the band’s pre-show ceremony of blasting Bohemian Rhapsody across the arena floor…which was an amazing experience in itself. 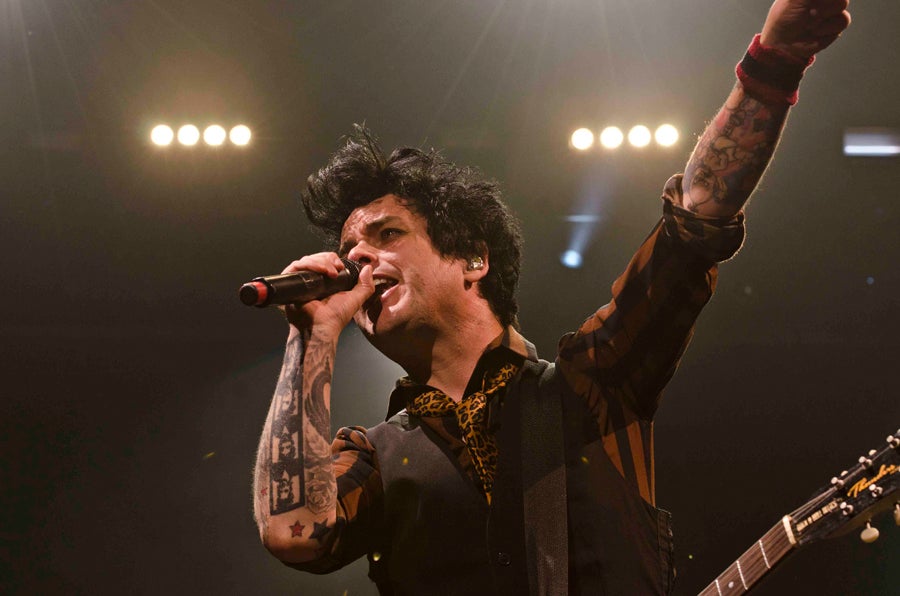 Though I’ve counted myself as a fan since high school, I certainly wasn’t prepared for what the boys had in store, which included pulling a handful of audience members up on stage to live out their rock star dreams. To say the show was an emotional experience for me was an understatement, and certainly one I never thought I’d make in reference to the band of California punks. 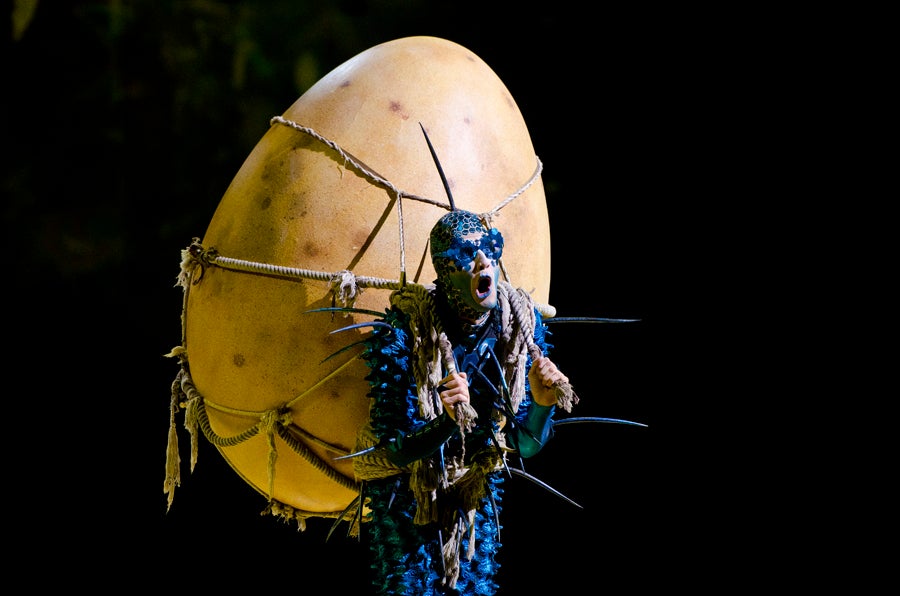 There are few people in this world that would say going to a Cirque du Soleil show isn’t on their bucket list — not many that I know anyway.

Before moving to London I had only ever had the chance to take in the La Nouba in Walt Disney World, but Bud Gardens changed all that. Not only have I gotten to be in the audience for two different incarnations, 2016’s Toruk and now this year’s OVO, but I’ve also been lucky enough to get a peek backstage, meeting and writing stories on the people that make the spectacle, from crew, to costume designers, to the artists themselves. This time around I spoke to Kyle Cragle, OVO’s hand-balancing dragonfly, who funny enough had been inspired by the very show I had first seen so many years ago.

“We saw the Cirque du Soleil show La Nouba . . . that’s when I told my parents I wanted to work for Cirque — I was totally in love with it,” he said. “That’s when I really started to discover the circus arts world . . . eventually I developed so much of a passion for it I moved 2,000 miles away from home to pursue my dream.” 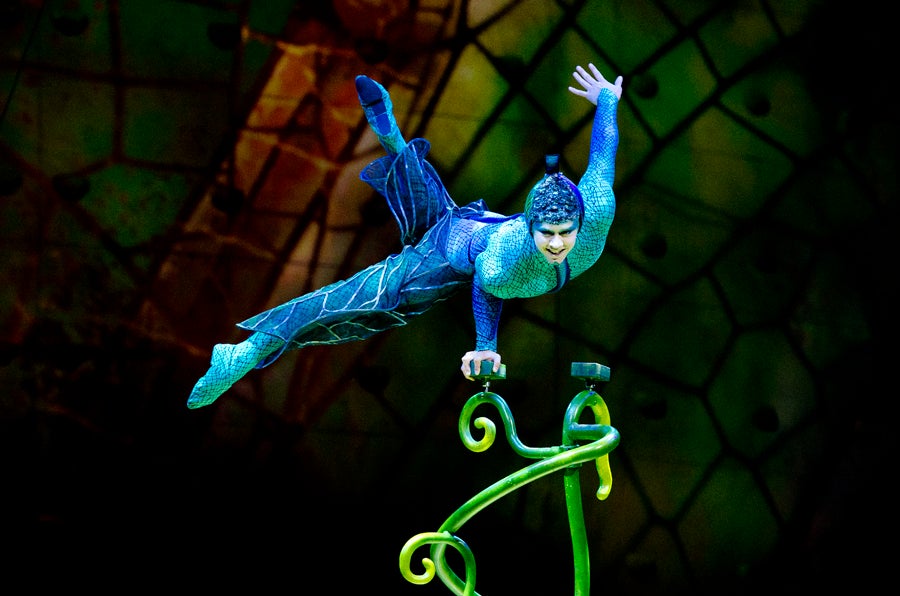 Featuring a cast of critters from scarabs to spiders, and even fleas, OVO explored an environment of beauty and biodiversity, all with the kind of performance audiences have come to expect from Cirque — and that’s something you can’t just find anywhere.

5. A glance behind the curtain at Bud’s Backstage Experience – June 1 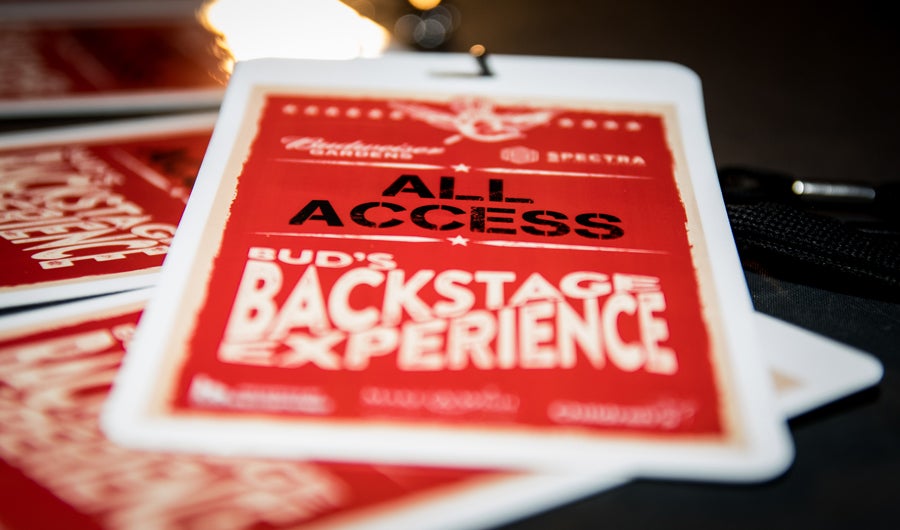 If you ever wanted to know how much work goes into bringing some of the biggest names in music, theatre and sports to Budweiser Gardens, all you have to do is buy a ticket — to the venue’s backstage extravaganza.

This year’s offering raised money for both Make-A-Wish Southwestern Ontario, and the Children’s Health Foundation, while guests were given the chance to take a look around recreations of artists’ dressing rooms and memorabilia, including the Tragically Hip’s love of hockey sticks, jerseys, and assorted Canadiana, as well as Green Day’s penchant for Red Bull and sweets. Those in attendance were also treated to a buffet of some of the artists’ favourite foods, including the Dixie Chicks' broccoli and cranberry salad, Sir Elton John’s mini-potato gratin stacks, and Dean Brody’s bacon-encrusted smoked gouda mac ‘n’ cheese.

More than just a fundraiser for a couple of worthy local charities, the Backstage Experience solidified for me the amount of blood, sweat and tears organizer display with every different kind of concert and event we’ve all come to expect from our very own world-class venue. And while that kind of dedication may seem second nature to them, it’s awesome to know how much they care about their guests, on both sides of the stage.

Now, narrowing down 36 events to just a handful is hard enough, so I’ve got to add some honourable mentions to the mix, like Jeff Foxworthy & Larry the Cable Guy, Bob Dylan, Disney on Ice, and Arkells, not to mention the first-ever London Tequila Expo.

With six sold-out events, including the recent World Junior Pre-Tournament Game, Budweiser Gardens has continued to bring the kind of spectacles we’re all chomping at the bit to see — and with so much yet to come, from Shania Twain to Rod Stewart and more, they’re showing no signs of slowing down anytime soon.

I want to thank the crew at Budweiser Gardens for all they’ve done, not only for me, but for all of us. Keep up the great work guys, and I can’t wait to see all that you have in store for 2018.