While some say Arkells have ‘skyrocketed’ to Canadian fame, that’s not the case. They’ve earned their way as demonstrated last night at Budweiser Gardens.

The crowd was abuzz as Arkells fans stormed the arena in their best leather jackets and rainbow tassels. A sense of community permeated the venue as Londoners came out to collectively enjoy their favourite band.

Joining Arkells was opening act COIN, an alternative band from Nashville, Tennessee. The lead singer, Chase Lawrence, exuded an energy that fit perfectly with the headliners. The band treated attendees to songs like “Talk Too Much” and their latest release, “Crash My Car.” The crowd was extremely welcoming and the band vowed they would be back. 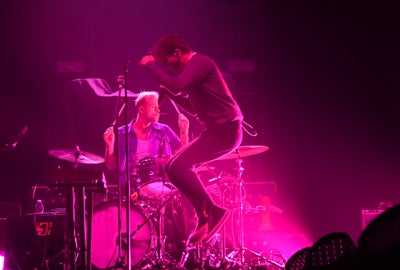 With the audience sufficiently warmed up, it was time for Arkells to hit the stage.

The band opened to a roar of applause with “Hand Me Downs,” the popular Rally Cry single they performed at the 2019 Junos. Concertgoers were quickly moving and singing along with frontman Max Kerman, who brings forward a stage presence comparable to performing greats like Freddie Mercury, Taylor Swift and Gord Downie. 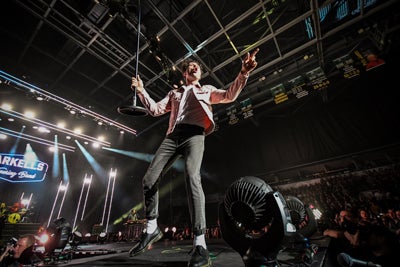 The band transitioned from one hit to another with fan favourites like “Knocking at the Door” and “Eyes on the Prize.” They made it their mission to get every person on their feet, with Kerman going as far as to start a conga line during “People’s Champ.”

Arkells demonstrated an immaculate quality of entertainment and showmanship that come only after years of hard work, songwriting and performing. Kerman acknowledged how far the band has come when he mentioned the time they took a Greyhound from Hamilton to London and performed for a handful of people at Salt Lounge. The band has worked their way up from performing to progressively bigger crowds at venues like London Music Hall to now headlining arenas. They even sold out Scotiabank Arena earlier this year.

Part of their success may come from the camaraderie they’ve built with fans. From social media interaction to concert engagement, they make everyone feel included in the show. Fans can call in to request performances of album deep cuts (last night’s winner being “On Paper”). During their performance of “Only for a Moment,’ they invited fans on stage to sing a bit of karaoke. Kerman serenaded the GA crowd with “And Then Some,” while afterwards a fan joined the band on stage to play guitar during “Private School.” 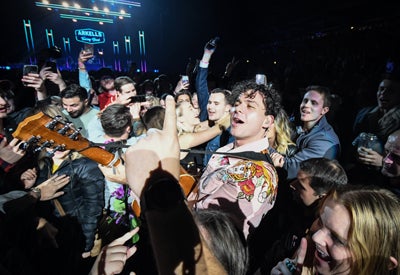 Alongside their catalogue of hits, fan interaction kept the crowd dancing and singing as the band closed out the main set with “Leather Jacket.” Of course, audience members demanded more and Arkells came back out for a three-song encore.

At this point, Kerman had changed into his own rainbow tassels for a powerful rendition of “Relentless.” COIN joined the band on stage for a cover of Robyn’s “Dancing On My Own” with Kerman and Lawrence trading off the microphone.  The band closed the night with “My Heart’s Always Yours,” one of many hits from the album Morning Report.

It’s rare for a crowd to stay hyped through an entire show and even afterwards, but Arkells manage to pull it off every time. It’s no stroke of luck behind the band’s rise to the top; it’s years of hard work, dedication to their fans and a little dash of ‘it’ factor.