Figure Skating vs. Ice Dancing: Do You Know The Difference?

The 2018 Winter Olympics were one to remember for Canadians as The Canadian Figure Skating Team led by Tessa Virtue and Scott Moir gained more international recognition than ever before. Figure skating events are a major Olympic highlight, however many fans still seem to have the same question every four years: what’s the difference between figure skating and ice dancing?

The simple answer to this is that ice dancing is a discipline within the sport of figure skating. Similar to ballroom dancing, ice dancing places an emphasis on rhythm, technique, enthusiasm and musical interpretation. Singles and pairs skating places a greater importance on jumps, spins and dramatic lifts. Although both disciplines have different areas of attention, they should not be considered separate sports. 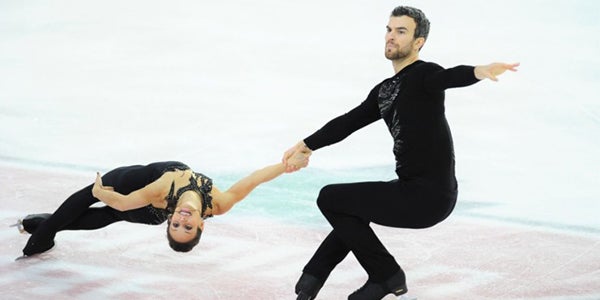 In more detail, there are two types of ice dance competition: ‘the short dance’ which is about 3 minutes and the ‘free dance’ which lasts about four minutes. Each dance must include certain skills such as twizzles and complicated step patterns inspired by ballroom dance. Ice dancers always perform in pairs and are required to skate to music that has a steady beat or rhythm. They are also the only skaters who can dance to music with vocals and are marked intensely on timing and precision of steps.

Singles and pairs skating are rooted much more in Olympic history and include signature skills such as triple axels and long tornado spins. Their powerful performance's keep spectators on the edge of their seats, however this comes with a price of more harsh falls. These skaters are also allowed to perform overhead airborne lifts where as ice dancers have more restrictions and can not be thrown or lifted above the head.

Budweiser Gardens has been home to many figure skating and ice dancing events such as multiple Disney on Ice performances, Ice Age on Ice, Stars on Ice and the 2013 World Figure Skating Championships. This year, we are excited to have Olympic gold medalists Tessa Virtue and Scott Moir for an incredible Stars on Ice performance. Olympic silver medalists Patrick Chan and Elvis Stojko along with Olympic Bronze medalists Meagan Duhamel, Eric Radford, Jeffery Buttle and Javier Fernandez will also be sure to impress this years crowd with flawless spins and ground-breaking jumps. We can’t wait to watch Canada’s finest athletes bring their unique talent to Budweiser Gardens on Sunday, May 6th for a sold-out Stars on Ice performance! We hope to see you there!